The Wind of Hope Blog

Home > The Wind of Hope Blog 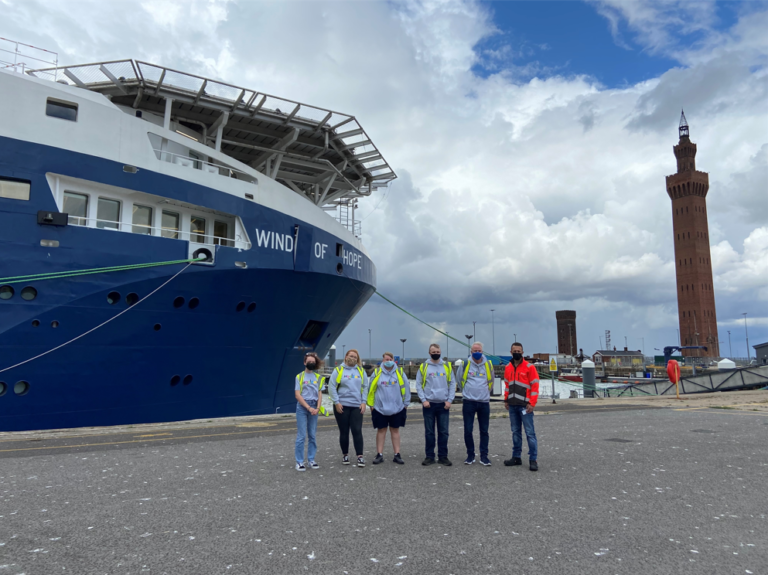 Hi, welcome to our blog. We are the Young people’s Development Group (YPDG). We are young people who have come together to help create Horizon Youth Zone in Grimsby. This blog is to keep a log of our progress and achievements as we continue to work towards the opening of Horizon Youth Zone and the many opportunities that it will bring.

Over the past few months, the YPDG members have been learning about Ørsted’s emerging offshore wind farm, Hornsea Two (HOW2), which is directly supporting Horizon Youth Zone. HOW2 will be the largest offshore windfarm in the world and will produce enough power for 1.4 million homes. The windfarm is so large it spans beyond the horizon and fits well with our message to local young people ‘look beyond your limits’.

The Wind of Hope is an 84-metre world-class service vessel which will accommodate 90 technicians working on the windfarm for up to three weeks at a time. YPDG members, Kieran, Isobel and Ellena were invited onboard to share with local media what they have learnt about the importance of safety and a good work/life balance whilst working at sea.

First task of the day was to have a Covid Lateral Flow Test and once we had been given the all-clear we made our way over to the vessel. Following a short talk by the Health and Safety manager we climbed the gangway and was directed to a large onboard auditorium for our induction from the head of the Hornsea Two wind farm.

The team were allocated to the onboard Gym (Ellena), ‘Botel’ Cabin (Kieran) and messroom (Isobel), but unfortunately due to the ship’s crew being in the messroom and Covid restrictions, Isobel and Alice had to give their talk from the auditorium.

We were supported by Ørsted Technicians Rob, Lee and Paul who will be working on the ship soon and met with their apprentices who will be joining the crew later in the year.

We also met Patrick Harnett, Senior Programme Director who is responsible for the whole project – it was his first look at the vessel too.

The press arrived on the vessel and were interested to talk to the YPDG and Technicians and ask questions about the different areas they were showcasing to promote the importance of good physical and mental health and wellbeing. BBC Look North and ITV Calendar did some filming along with Radio Humberside and the Grimsby Telegraph took photos and interviewed us about the Youth Zone.

Once the press had finished it was our turn for an exclusive tour. We were shown different parts of the ship from the warehouse and storage area, the small craft launching station, to the cabins and up to the Helideck. Everyone we spoke to at Ørsted was so positive about working for the company and gave our team some very informative advice about working in the renewable wind sector.

We ended the tour back on land in Ørsted’s East Coast Hub to enjoy a great buffet lunch – we all left buzzing!

Later that evening we saw the news coverage about the event on both ITV Calendar and BBC Look North. There was even a Facebook live event from the Grimsby Telegraph showing us walking past to the Helideck, and the reporter asking about the support Ørsted are giving Horizon Youth Zone.

What a fantastic experience onboard the Wind of Hope for all the team – both YPDG members and the volunteers.

“All the Ørsted people seem like they enjoyed their jobs on the ship. The technology was most interesting, especially the gangway which stabilises itself so they could ‘walk to work’.” Kieran Green 16

“Everyone from Ørsted was really friendly and I enjoyed chatting to Rob in the gym about his job looking after the crew. I had fun on the treadmill and sitting on the bike for the press photos, but I felt a bit sick when the crane made the ship move. The food smelt great coming from the mess.” Ellena Warwick 13

A big shout out to Ørsted for all their support with Horizon Youth Zone. Thank you!

“As always it was an absolute pleasure to work with the young people from Horizon. Their confidence and ability to talk to the press was impressive. They are not only brilliant ambassadors for the Horizon team but for Grimsby! Thanks for coming to help us present the new vessel, we really appreciate it.” Lauren Little, Stakeholder Advisor