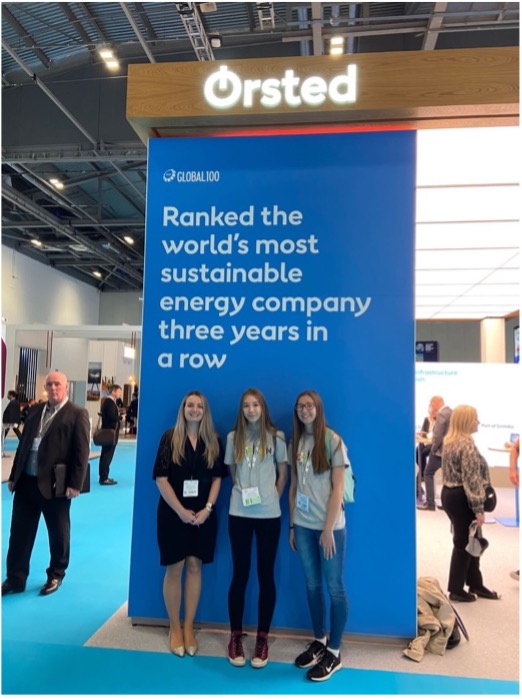 Erin and Harriet from Horizon’s Young People’s Development Group were kindly invited to attend the Global Offshore Wind Conference in 2021 courtesy of Horizon Patron Ørsted, who were one of the lead sponsors of the RenewableUK conference. Ørsted have been constructing and operating offshore wind farms out of Grimsby for a decade, helping to start a new chapter in the town’s story and place it at the heart of the global green energy transition. The event was a fantastic opportunity for the YPDG to represent Grimsby’s young people and to learn about the ever expanding career opportunities within their hometown. Alongside the amazing team at Ørsted, Melanie Onn, Grimbarian and Deputy Chief Executive of RenewableUK, put together a VIP schedule for Erin and Harriet to ensure they gained the most out of the experience. The event was an eye-opener to the vast array of jobs available within renewable energy from archaeology to the innovative design engineering needed for turbine toilets. Throughout the experience Erin and Harriet’s confidence grew and they were completely unfazed interviewing global leaders within the industry, asking the burning questions the YPDG had armed them with. They also met, with pride, many fellow Grimbarians already working within the industry who willingly offered their advice for young people, which seemed to have a common theme  ‘do what you enjoy, it is ok to fail, grasp opportunities, be positive and open to change’. This is their journal from the visit:

After travelling down to London the previous day, we arrived at ExCeL London just before 9am.The exhibition centre was so much bigger than I had imagined, so it was good to have time to familiarise ourselves with the set up. Luckily for us, Ørsted’s stand was in the centre so it was easy to find. We were greeted warmly by Ørsted who suggested that we take some time to look around the exhibition hall.

There was so much to see! We went around the hall and when we saw an interesting stand, we went to ask about what the company does. It was very informative.  As well as educating ourselves, we also spoke about Horizon Youth Zone to try and spread the word. After a very interesting but busy first few hours we had the chance to meet Oankar Birdi who is Head of Programmes and Planning for Renewable UK (RUK). It was nice to talk to her about what she does within RUK.

Then we had a lunch break which was followed by our first conference session chaired by Benji Sykes, Vice President, UK Offshore, Ørsted on ‘Our Climate and Biodiversity crisis’ followed by ‘Imagining Britain’s seas in 2050.’ This was a new experience for me and Harriet because we had never been to a conference before, so we weren’t sure what to expect. I learnt a lot in this conference session and really enjoyed it.

After the conference we had the privilege of having coffee with Dan McGrail, Chief Executive of RUK. Talking to him and hearing his story of how he became CEO was very inspiring and I’m so glad we got the opportunity to talk to him. Barnaby Wharton then joined us and told us about how he became the Director of Future Electricity Systems for RUK and then he explained to us about green hydrogen.

While being in London we wanted to take the opportunity to visit a Youth Zone, so we travelled to Croydon in the evening to see Legacy. Even though we were exhausted after a long day at the conference, it was amazing to see Legacy and it made us feel more excited for when Horizon Youth Zone will be finished in Grimsby.

The second day of the conference was somehow even busier than the first! Firstly, we attended the COP26 Presidential address which I found interesting especially as it is a very current topic which will become the main topic in the media over the next few weeks. After this, we filmed an interview with Duncan Clark, Head of UK Region, Ørsted. Grimsby’s Young People’s Development Group had helped us come up with some questions to ask Duncan the week before, so it was great to get answers to the questions.

After our interview with Duncan, we did some ad-hoc interviews on film with people from different stands. We interviewed people from Sulmara, Wessex Archaeology, SSE Renewables, Trauma and Resuscitation Services and also Lauren from Ørsted. Melanie Onn supported us with the interviews as well as a camera crew.

After a full-on morning of filming, we spent half an hour supporting a supply chain event on the Ørsted stand. Then we headed over to Renewable UK’s stand where we were meeting Vicky Mant. It was lovely to speak to her and she told us about how she became the Director of Business Development.

We then headed to Kings Cross to get our train home. Overall, it was an amazing experience which I will never forget. We both learnt a lot and enjoyed it so much. We are extremely thankful for this opportunity and for how welcome we were made to feel while at the conference.

To learn more about our partnership with Ørsted and to read an interview with Erin and Harriet about their experience and careers available in the offshore wind industry, please visit:

Horizon Youth Zone is extremely grateful to have Ørsted on board as a valued Patron, not only supporting the development of the Youth Zone, but providing incredible opportunities for young people already – we are excited to see how the partnership grows over the coming years.